Imported Cars and the Mainstream Media: Why You Only Hear One Side of the Argument 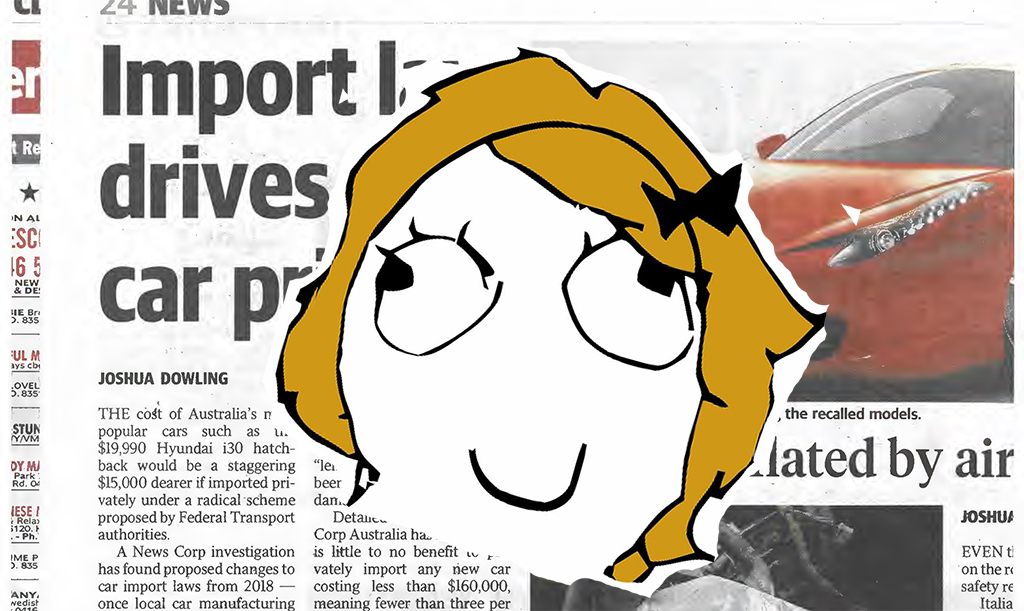 A small article in a mainstream newspaper was passed across my desk this morning, as is often the case when such things get printed. Once again, Joshua Dowling, News Corp’s “National Motoring Editor” and FCAI (Federal Chamber of Automotive Industries) corporate lap-dog, has gone on another attack about how allowing private buyers to import their cars from overseas will bring hellfire and damnation. No doubt Josh can look forward to a well-paid PR job working for a vehicle manufacturer when Rupert Murdoch decides his time is up.

Before discussing the article itself, please note that two separate federal government reviews have recommended that, with appropriate structures in place, Australian citizens should be permitted to freely import used vehicles from overseas for their own use. Both reviews made the suggestion that any used vehicle up to the age of 5 years old should be considered eligible.

This, of course, sent the FCAI and other representatives of the car manufacturers and dealers into a tailspin. Have enjoyed record new vehicle sales (and margins, for that matter) year-on-year for the last decade, they were apoplectic at the prospect of their gravy train choofing off into the distance. How would they maintain their domination of the market if punters were able to find their own cars?

The FCAI’s initial argument was that imported cars could have a variety of problems associated with safety and emissions. They weren’t thinking of their own profits, they were worried about the planet and the wellbeing of the general public! Let me know if you need me to pass around the vomit bags. Of course, their argument may have sounded more convincing had they not also announced that they would refuse to do any servicing or warranty work on imported vehicles. “We care about your safety, unless you happen to have a safety recall on one of our products that you didn’t purchase through our approved dealers.” Before you chuckle at the irony, bear in mind that this decision could have serious safety implications for the owners of imported vehicles.

Putting all that aside, it seems as though the FCAI’s argument has now changed tack leading up to the election. Now they’re worried about private importers rorting the Australian tax system by under-declaring the value paid for the vehicle! Thank goodness we have the FCAI and the vehicle manufacturers, traditionally such exemplary corporate citizens and contributors to the wellbeing of our society, to stand up for our rights! Let’s not mention that they have been petitioning the federal government to remove the Luxury Car Tax for many years, claiming that the tax is the reason why we pay so much for our cars in Australia, not their healthy profit margins. Oh, also ignore that dealers will happily provide most buyers at the top end of town with various tax-minimisation options when purchasing their vehicles, that ensure that ALL tax-payers end up losing.

So why do we only ever hear one side of the story when it comes to used imported vehicles? It’s hardly rocket science: car manufacturers advertise heavily in all forms of media, and they therefore have the ability to remove their support if outlets start publishing articles that are inconsistent with their opinion. I have written articles for magazines that have been rejected out-of-hand for this exact reason. ‘Don’t bite the hand that feeds you’ is the common mantra, particularly in the print media, which is struggling to remain profitable in the transition to the digital age.

The end result is that we, the public, are being denied a balanced debate on the issue. A blog article on an importer’s website is hardly going to change the world, but it’s worth a crack. I take solace in social media’s ability to savage fluff pieces when they see them. From the perspective of an import business owner, the Personal New Import Scheme (in its proposed form) will have little positive impact for me, and will not change anything for at least 95% of car buyers. But ultimately, it’s not about that; it’s about genuine freedom of choice.  For all the makes and models currently on the Australian market (and we have plenty of them), buyers are still restricted to what the dealers decide they will sell them. If someone wants to spend way over the odds importing a brand new Honda S660 from Japan, why should they be prevented from doing so if Honda Australia decides not to sell them through official channels?

Just for a bit of sport, let’s pick apart Mr. Dowling’s advertorial, so you can appreciate how easy it is to drive a freshly-imported truck through its holes. 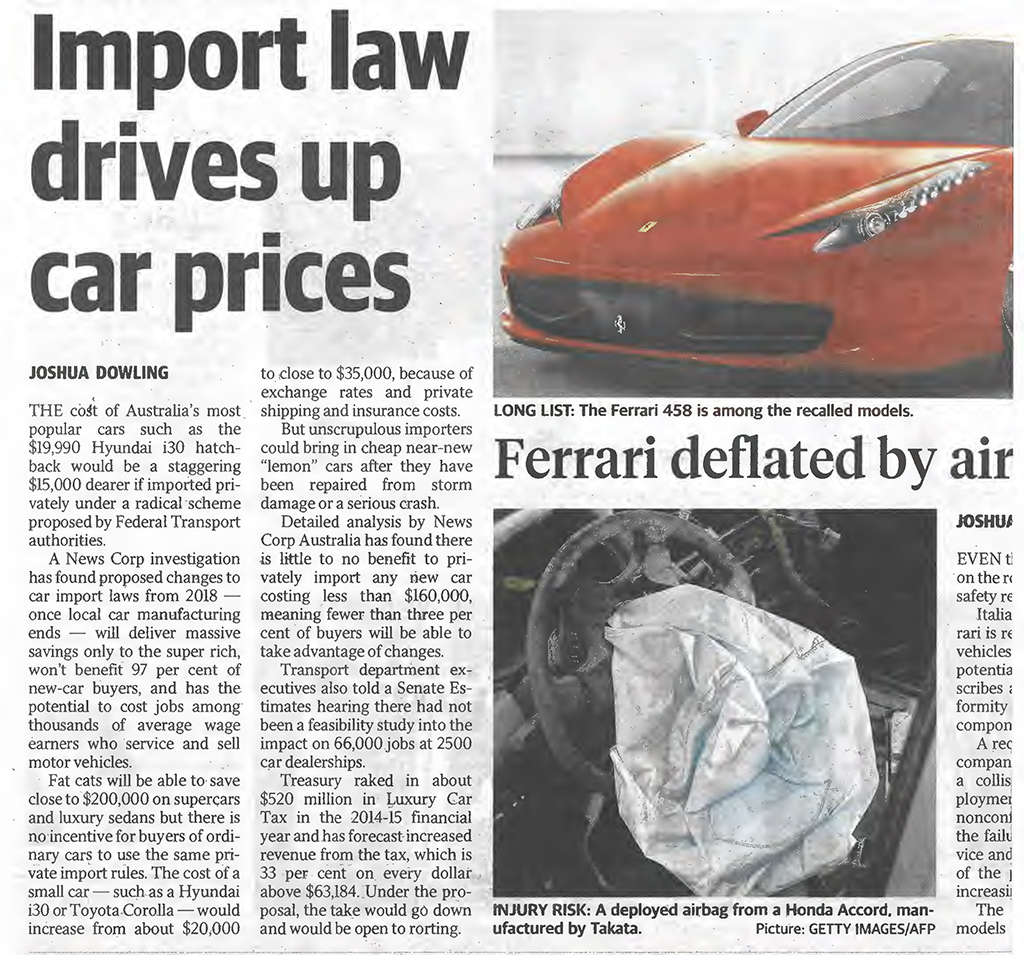 “Import law drives up car prices” What really irks me about this is the understanding that the vast majority of readers will skim read the headline without reading the article, and assume that if we allow in used imported vehicles, somehow the prices of all cars will rise. Aren’t new vehicle retail prices controlled by the car manufacturers themselves?

“The cost of Australia’s most popular cars such as the $19,990 Hyundai i30 hatchback would be a staggering $15,000 dearer if imported privately under a radical scheme proposed by Federal Transport authorities.” Somewhere deep inside the FCAI (and possibly Josh Dowling’s brain), someone thought this argument was a cracker. If you were presented with the choice of a $19,900 Hyundai i30 from a dealer, or a $35,000 Hyundai i30 from the UK, which would you choose? That question is rhetorical, by the way.

“A News Corp investigation…” – which is code for ‘information handed to us by the FCAI’ – “…has found proposed changed to car import laws from 2018 – once local car manufacturing ends – will deliver massive savings only to the super rich…”  Ok pause for a second. Is this the same FCAI who was saying recently that Australian buyers aren’t already being gouged on price by the retailers? How is it that the super rich can make massive savings on their purchases by buying their cars overseas?

“…won’t benefit 97 per cent of new car buyers, …” Aside from the obvious point that 103% of statistics are made up on the spot, if there is no financial benefit to importing a car, surely that would mean there is no impact on the new vehicle industry, would it not?

“…and has the potential to cost jobs among thousands of average wage earners who service and sell motor vehicles.” Hang on, if people aren’t buying imported cars, how will it cost the industry jobs? It’s worth also noting that if vehicles are indeed imported on a larger scale, any loss of jobs at dealerships will be mitigated by a corresponding increase in the number of jobs created through the imported vehicle industry.

“Fat cats…” yes, Josh, the same ones who buy from new car dealers now “…will be able to save close to $200,000 on supercars and luxury sedans…” I’m glad I don’t have to bother working out how much new car dealers are ripping us off; it seems the FCAI and Mr Dowling are happy to do it for me! “…but there is no incentive for ordinary buyers to use the same private import rules.” Again, this argument would be laughable if the impact weren’t so serious. Remember, it was the government’s own Harper Review that suggested we be allowed to freely import used vehicles up to five years of age, a move that would have enabled many prospective buyers at the bottom end of the market to ditch their 20-year old Commodores and trade up to something safer and more fuel efficient. Cue the usual outrage from FCAI and the dealers, at which point the proposed scheme was whittled back to only allowing the importation of vehicles that are less than 3 months old and have less than 500km on the odometer, narrowing the potential buyers’ market to the top end of town. For the FCAI and Dowling to then criticise this potential outcome is a bit like a child shooting his parents and then complaining that he’s an orphan.

“But unscrupulous importers could bring in cheap near-new “lemon” cars after they have been repaired from storm damage or a serious crash.” Given that the new scheme is restricted to private vehicle buyers rather than businesses, I can only presume Mr Dowling is talking about dodgy members of the public bringing in cars that have had crash repairs or storm damage. Of course, the Australian buying public has never had to contend with dodgy repairs on Australian-delivered cars. Lucky for all of us, these same dodgy people have never thought to go to their local car auction to get a bargain when insurance companies flog off damaged vehicles straight after heavy storms.

“Detailed analysis by News Corp Australia…” Again, my BS detector is registering abnormally high readings. By ‘detailed analysis’, I presume old mate means ‘information supplied by the FCAI’ “meaning fewer than three per cent of buyers will be able to take advantage of changes”. Ho hum. See my rebuttal to this from the previous paragraph.

“Transport department executives told a Senate Estimates hearing there had not been a feasibility study into the impact on 66,000 jobs at 2500 car dealerships.” Hardly surprising – studies of this nature cost taxpayers in the hundreds of thousands of dollars. Interestingly, when imported-vehicle industry body AIMVIA approached a number of top-tier research companies to get some data to support their views on the benefits of used imported vehicles, many politely refused to assist, citing a ‘conflict of interest with current clients’. In other words, FCAI and the car manufacturers also give research companies plenty of business too; business the research companies aren’t keen to jeopardise. Just in case the cards weren’t stacked heavily enough against us already.

“Treasury raked in about $520 million in Luxury Car Tax in the 2014-15 financial year and has forecast increased revenue from the tax, which is 33 percent on every dollar above $63,184. Under the proposal, the take would go down and would be open to rorting.” And so, as Mr Dowling departs the building, he fires one last contradictory broadside at the LCT, simultaneously complaining about its existence and about the possibility that the revenue generated from it might drop. How can the system be rorted so heavily if only three percent of new car buyers would benefit from using the scheme? I give up. 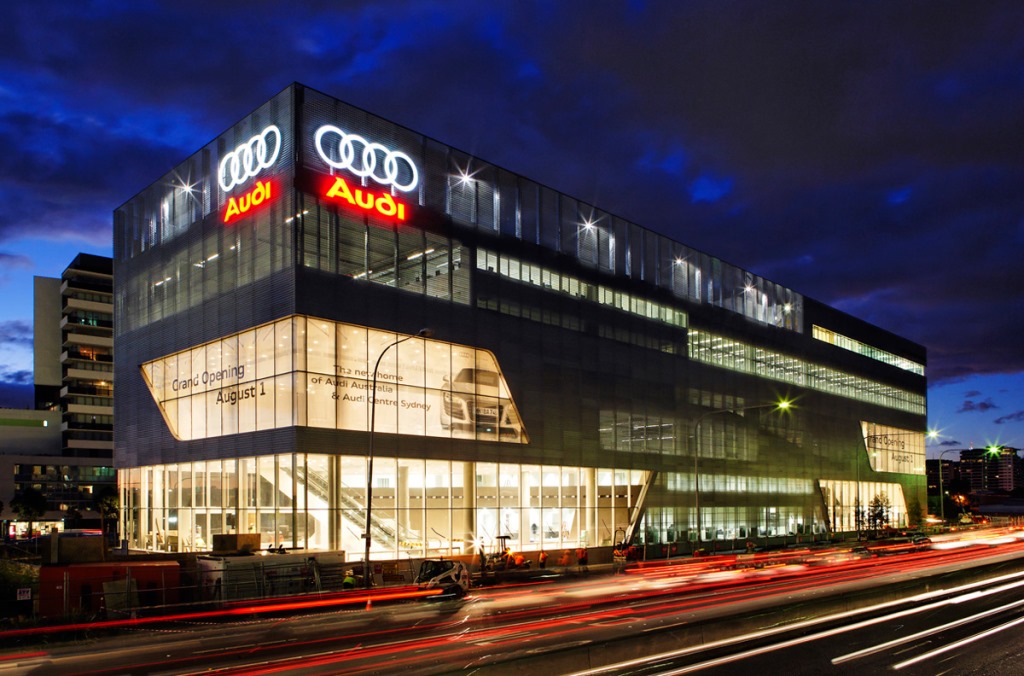 Audi’s multimillion dollar Sydney dealership, presumably paid for with sunshine and lollipops rather than the massive profits it makes here in Australia.

The reality is we, both car enthusiasts and the general Australian car-buying public, can not rely on our media to present a balanced argument, and as a result, we will all lose our right to determine for ourselves whether used imported vehicles make sense at a time when ALL car dealers will become solely stocked with imports. The outcome? We’re unable to purchase a quality used imported vehicle at an affordable price while FCAI and the car dealers (the real fat cats) continue to rake in record sales and record profits.