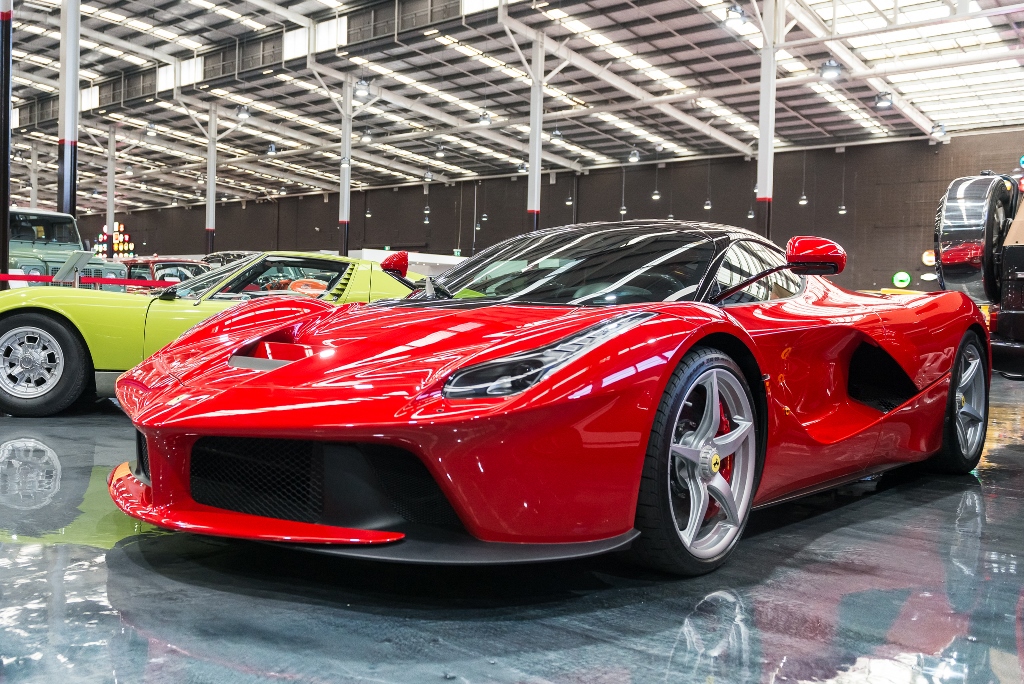 I recently had the privilege of helping out with the importation of this incredible hypercar: a 2015 Ferrari LaFerrari, valued deeeep into 7-figure territory (a gentleman never tells!). Let’s just say the tax bill alone would be a decade’s salary for some people. As of tomorrow (May 28) this amazing piece of machinery will be on display at the new Gosford Classic Car Museum, which is about as close to automotive nirvana as us mere mortals will ever get. What started as a Bunnings store (to give you an idea of its size) is now stuffed with $70m worth of incredible cars, many of which will be available for sale to suitable buyers, presumably with very deep pockets.

There’s just one catch for anyone considering buying the LaFerrari: it cannot be driven on Australian roads.

In order to achieve that goal, this car, with its electric engine assisting a V12 engine pumping out a total of 950 horsepower and built almost entirely from carbon-fibre, would need to be cut up and converted to right-hand-drive; a process that, even if it were logistically possible, would probably not leave much change from $1m and would completely destroy the vehicle’s value in the eyes of overseas collectors.

I acknowledge that driving a left-hand-drive (LHD) car on the left side of a road comes with inherent safety risks: try overtaking on a country road when you can’t see past the truck in front and you’ll soon understand. But put this in the context of riding a motorbike, or a scooter, or a bicycle, and it soon becomes obvious that the increased level of risk still sits fairly low on the scale.

To understand the context of Australia’s rules, let’s look at other RHD countries overseas. Japan is completely open in terms of allowing registration of LHD cars. Buyers can walk into your nearest Mercedes Benz dealer and decide whether they want their new E320 to be LHD or RHD when they order it! The UK, likewise, allows the registration of any LHD vehicle, partly because it already allows free movement of overseas-registered vehicles from Europe which are almost exclusively LHD too. New Zealand allows the registration of LHD vehicles older than 20 years, and vehicles younger than that point if they’re collectible, personally, imported or diplomatic vehicles.

To put it bluntly, Australia’s regulations surrounding LHD registration are wildly inconsistent and completely stupid. Back in the relatively recent past, some politician, in his infinite wisdom, decided that the importation of vehicles into Australia would be a federal process, and the registration of these same vehicles would be the responsibility of each state government.

That air vent is probably worth more than your whole car. I’m not joking. Photo credit: Matthew Everingham

Putting aside the federal government’s role for a bit, let’s have a look how each state handles the registration of LHD vehicles so you can truly appreciate the madness.

Queensland generally has fairly liberal LHD regulations, with any light vehicle over 30 years old able to be registered LHD provided it meets a roadworthy inspection. Modifications are not a problem if they are signed off by an engineer.

New South Wales, likewise allows vehicles over 30 years old to be registered either as a historic vehicle (in which case, vehicles must be largely unmodified), or for general use once they’ve been inspected by an authorised inspection station. Mods also not a problem, as a general rule.

Victoria has a similar 30-year old cut-off for modified LHD vehicles to be registered, but also allows vehicles over 25 years old to be registered under historic registration providing they are near-standard, effectively allowing the Vics to trump the other eastern states.  Want to register a 1987 Ferrari F40 in LHD? Victoria is the place to live.

As a South Aussie myself, it pains me to say that South Australia’s registration regime for LHD vehicles is nothing short of draconian. Vehicles registered LHD in SA must be in original condition, right down to the paint job and stereo. Not only that, LHD registration was originally available to vehicles 30 years or older, but that has now been cut back even further to vehicles manufactured before 1 January 1979.  I’d laugh if it wasn’t so serious. If you’re a South Aussie and want to keep your classic car LHD, register it interstate. Stuff SA, they don’t deserve our registration cash for such a ridiculous setup.

Western Australia, like SA, has fairly strict guidelines surrounding inspection of LHD vehicles, but the big kicker is that LHD vehicles only have to be 15 years old before they can be registered, resulting in many makes and models hiding in WA that could never be registered on the eastern seaboard.

Own a Bugatti Veyron and want to bring it back to Australia with you? Northern Territory is the place to live. If you personally import your vehicle, it can be registered LHD in the NT with no age restrictions. As a result, NT is also filled with an amusing number of crappy LHD snot-boxes from the US, left behind by visiting US armed forces personnel after they head back home.

The result? It’s quite common for vehicles in one state to technically become unroadworthy once they cross the border, leaving owners of LHD vehicles needing an engineering degree to understand whether or not they’re about to get nabbed and fined.

Confused yet? Wait, it gets better!

Before your LHD vehicle can even be registered, it must jump through a separate set of hoops to even arrive in the country. As mentioned earlier, importation is controlled by the federal government, and if you want to keep your car LHD for registration in any state other than NT or Tasmania, it must be built prior to 1989 and be largely unmodified to meet our importing regulations. It’s worth noting that the federal government has proposed moving to a 25 year old rolling scheme, whereby vehicles over 25 years of age will become eligible for importation, even if they’re LHD. The crunch is that unless the state governments also play ball, there will be an awfully large number of LHD vehicles sitting in storage for 5 years until they can be registered at 30 years of age. Madness. 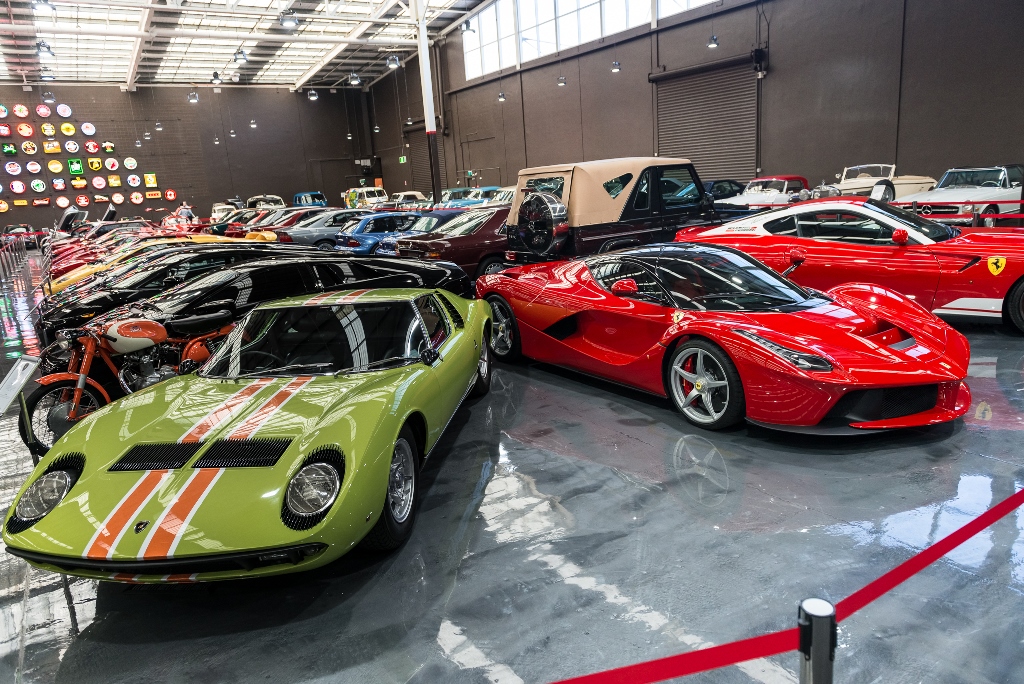 Interesting size comparison with the Miura! Photo credit to the amazing skills of Matthew Everingham.

This, of course, brings us back to our Ferrari LaFerrari at the start of the page. How is it even conceivable that this hypercar, with 950bhp, carbon fibre brake discs and unparalleled levels of safety is refused registration without being converted to RHD when every single state government in Australia will happily allow 1960s muscle cars, with their blg-block V8 engines, leaf springs and drum brakes, to be registered left hand drive? Which vehicle presents a greater risk to the road toll?

In recent discussions about potential changes to importing regulations, the suggestion was floated with the federal Department of Infrastructure that rare hypercars such as the LaFerrari, Porsche 918, McLaren P1, Pagani Zonda, Bugatti Veyron and the like, which are only produced in LHD, should be permitted to remain unconverted and then be registered LHD in Australia. The department’s response? “Oh the state registration bodies would never allow it”… Really? Who is in charge? Pressure can hardly be brought to bear on state governments to change their policies on LHD registration if the federal government’s own regulations demand the importer commit (on paper) to converting the vehicle to RHD as part of getting an import approval.

The red tape surrounding LHD registration in Australia is an embarrassment, and it needs to be cut. Sure, we’re talking about cars that only a very lucky few of us will ever get to drive. For the rest of us, just experiencing a hypercar driving past on the street is the stuff dreams are made of, but it is a pleasure currently denied to all of us because of what looks suspiciously like a pissing contest between federal and state governments. In the end, their pig-headedness and lack of ability to agree on one set of rules means we all suffer. I hope that one day common sense might prevail, but given its scarcity, both in politics and in government departments, I’m not getting my hopes up.

In the meantime, make the trip to see the LaFerrari in the metal/carbon fibre at Gosford Classic Car Museum. Well worth the drive from Sydney if you happen to be in the area! (PS not even getting paid for this plug  – didn’t plan that very well!)

Thanks once again to Matthew Everingham for the pics on this page. Follow the link and get some of the best damn pics of your car you will ever see.