The Life of a Japanese Motorist – Part 2 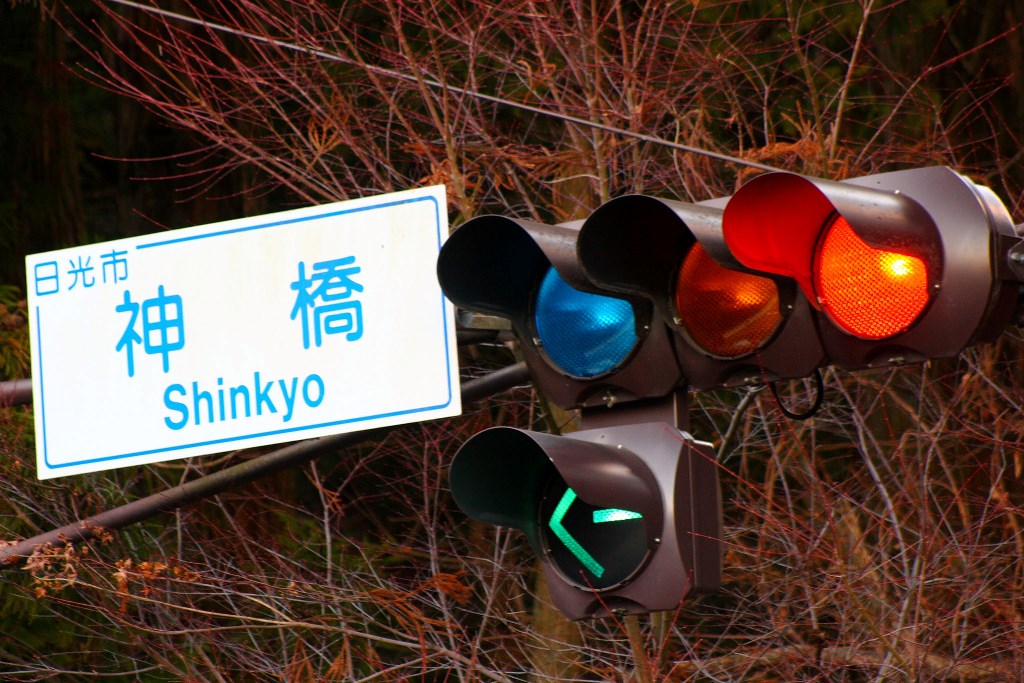 You were set the task of uncovering why traffic lights, in rural Japan in particular, have a blue light for “go” instead of green. The answer lies in the ambiguities of the Japanese language: believe it or not, the word “ao” was traditionally used to describe the colours blue AND green, and only in recent times has “midori” (yes, well spotted, you liqueur connoisseurs!) been used to describe green and help make a better distinction between the two colours. In the major cities most traffic lights look pretty much like they do in Australia, but in rural areas, where some traffic lights are much older, the “go” light is basically blue with a slight green tinge. Quite a bizarre sight, particularly at night when you’ve had a few drinks.

(For those of you wanting to read more, the pic above is stolen from an excellent article about this topic in the Japan Times.) 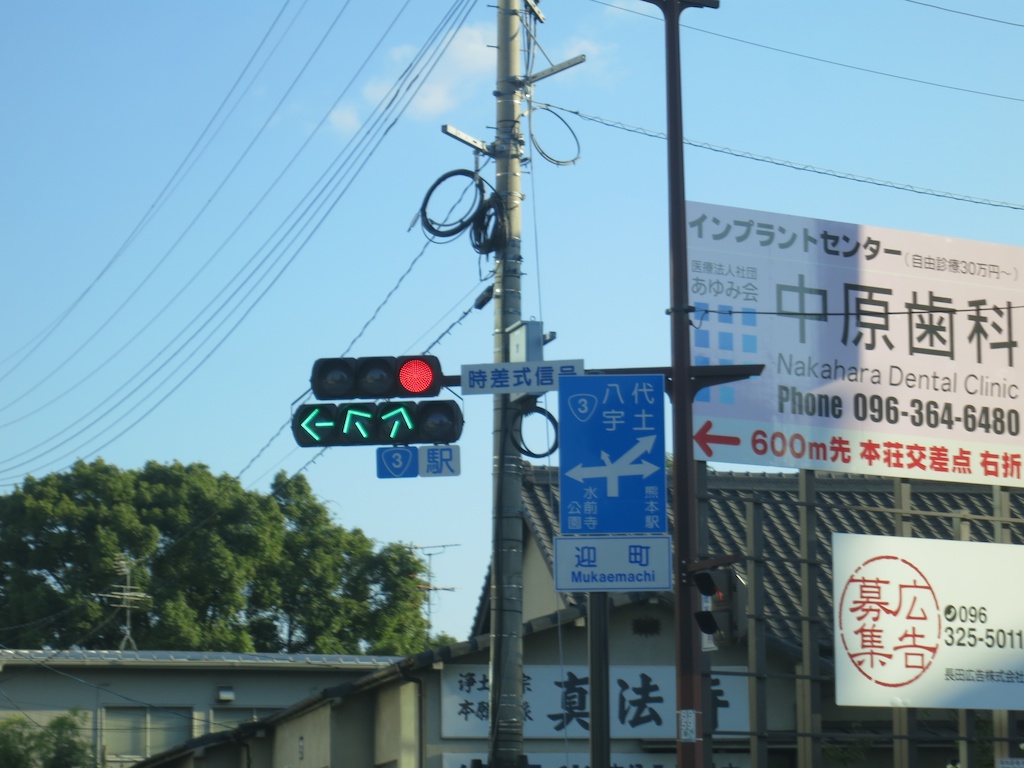 Would you know what to do when confronted by this??

One of my first real moments of panic whilst driving in Japan also involved traffic lights. If you’re allowed to go straight ahead at a set of lights, but not allowed to turn right, Australian traffic lights present you with one solid green light with a red arrow along side it. What would seem like common sense to most of us apparently isn’t so obvious to Japanese bureaucracy. To achieve the same outcome in Japan, motorists are presented with a solid red light, a green arrow pointing left, and a green arrow pointing upwards! Having never seen this combination of lights before driving there for the first time, I erred on the side of preserving my own life and stayed put, until a mass of cars came past at high speed, leaning on their horns and swerving around the mobile chicane. Funnily enough, I remembered exactly what it meant from there on in. 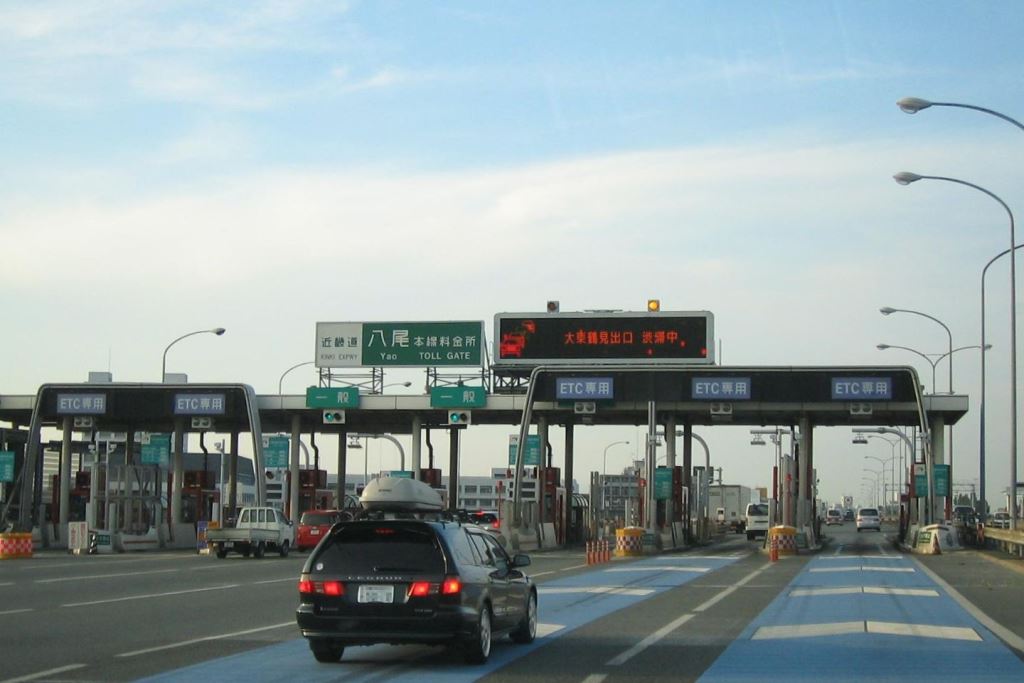 Since the article was written, Japan has moved to a boom-gate-free system similar to Australia’s. Worth adding this pic purely because the road is called the Kinki Expressway.

To truly appreciate Japanese efficiency, one must admire the marvels of ETC, or Electronic Toll Collection. Similar in theory to the eTag system here in Australia, the ETC units are hard-wired into cars, and then the unit itself is programmed and registered with the local RTA. Rather than carrying the unit itself from car to car, an ETC debit card (which is the same size as any normal credit card) slots into the unit, which, as I’m reminded daily in one of my cars here in Australia with ETC still fitted, will also tell you in a very polite voice if you’ve forgotten to insert the card before driving. So why go to the hassle of hard-wiring the units? In Japan, the toll points are all fitted with boom gates. If this same system was attempted in Australia, the newspapers could pre-write headlines such as “Boom Gate Malfunction Decapitates Motorbike Rider During Charity Run”, but not so in Japan, where nothing ever seems to break down, ever. When an ETC unit is fitted to a car, it is programmed to the dimensions of that vehicle. So then, when the car duly arrives at a toll collection point, not only does the system fleece you of your hard earned yen, it also, in the blink of an eye, assesses the size of the vehicle (based on what has been programmed into the unit) as well as the speed at which it is travelling, and controls the speed at which the boom gate is raised accordingly.

My Japanese friends never grow weary of watching foreigners duck for cover when they drive at the boom gates at high speed, knowing that the gates will always whip up in the nick of time. One particular motorbike rider made the headlines in Japan, because he was caught going through a toll booth at 190km/h! After the usual ‘hoon’ scaremongering, great praise was also heaped upon the ETC system because the boom gate still worked perfectly, even at those speeds.

Despite being quite lenient in other areas, Japan is extremely strict on drink driving. Drivers are not allowed to have any alcohol in their system whatsoever, so most drunk businessmen will usually resort to catching the train, breathing all over everyone and finding every female nearby somewhat attractive. The penalties are severe, and there’s one kicker that ensures that drink drivers drive home alone, and I think it’s a brilliant idea. If a driver is pinged for drink driving, all licenced passengers in the car are also penalised half of whatever is handed out to the driver. With the fines alone ranging up to roughly $10,000 when converted to Aussie pesos, anyone who chooses to drink-drive is effectively shunned by everyone around them before they leave the pub. What a great exercise in social engineering!

One last point worth mentioning is that of drifters. Back in the days before D1 even existed, you could head out to industrial estates, such as Nanko in Osaka, and find reasonable numbers of spectators enjoying the locals having a slide. Like most illegal activities in Japan, drifting was ignored by authorities in the hope that it would be a passing fad. As its popularity grew though, so did the numbers heading out to a variety of popular spots, and so did the speeds of the cars having a shot. As the driving became more extreme, the accidents became more severe and police started shutting things down. Drifters rarely get caught, but when they do, they get the book thrown at them. A couple of well-known Aussies still living in Japan will happily tell you their brush-with-the-law tales, and believe me, the results weren’t pretty.